He Helps Those Who Want to Help Themselves 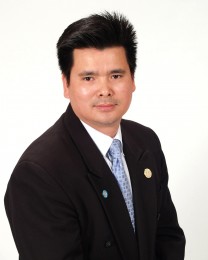 “Last June, my friend [now sponsor and SC] Hadwin Leow started inviting me to Business Presentations. I said ‘no’ to him three times because I was so busy. The fourth time he asked me, I thought, this is my friend and I don’t want him to keep bothering me, so I went with him.” Henry attended an Ambit Opportunity presentation at the Sheraton LaGuardia East Hotel and came away thinking, “Wow! This is BIG, and I’ve lost a couple of weeks already.” He went home and started doing his homework. “I went to Google and started learning about deregulation. I went to the New York Public Service Commission website and saw this was a real opportunity.”

Henry joined the business July 2, 2007. Within two weeks he promoted to RC. Within two months he promoted to SC. And on February 23, less than eight months later, he reached Executive Consultant leadership status. “When I came into the business, my intention was simply to help others. After two or three months, my Ambit checks were the same as the pay at my job. I realized, by helping people, I get help, too!” The normally soft-spoken Henry exclaims, “This is big pay, you know!”

Helping people has been Henry’s calling in life. As a social worker for a health care union in New York, he routinely conducted workshops to help people. So presenting the Ambit Opportunity has come naturally to him. “It’s like conducting a workshop.” Two days ago, Henry - who has a wife and three kids - submitted his resignation to the union and has begun working his Ambit business full-time.

Bringing the Opportunity to Chinese immigrants in New York
Two weeks after joining the business, Henry met Co-founder and Chief Marketing Officer Chris Chambless at a meeting in New York. Henry asked Chris what he would think of approaching the large Chinese immigrant population in New York. “Immigrants don’t have a lot of choices,” Henry says. “I thought this network marketing business would give them an opportunity to help themselves and their next generation to live a more prosperous life in America.”

Chris asked Henry, “What do you need from us?” Henry said he needed the Business Presentation translated into Chinese and a place to present. Chris said, “Go for it!”

Henry got together with his friend from church SC Henry Jia and they translated the Business Presentation into Chinese. (Later, NC Steve Thompson gave Henry Ye and Henry Jia the nickname “Los Dos Henrys.”) EC Henry Ye says, “The day I saw the Chinese translation posted on Power Zone, at that moment, I knew this was the right company for me.” Henry says about Chris, “He took it on faith I would do what I said I’d do. Chris, you are a man of faith and a man of vision and I will not let you down.” Today, “Los Dos Henrys” give the Chinese Business Presentation every Friday evening at the Sheraton LaGuardia in Flushing, New York.
Ambit leadership inspires Henry toward success
“Steve Thompson is a great leader. I didn’t know him very well, only that he was in New York every two weeks. In between those meetings, I would write down a whole list of questions I had and get the answers from Steve when he was here. I learned from him and started working very hard.” About hard work Henry says there is an old Chinese saying, “Failure is the Mother of Success.” He says if that’s true, in Ambit there is another saying, “Duplication is the Father of Success.”

Henry takes to heart Co-founder and CEO Jere Thompson’s mantra, “Never sacrifice integrity for growth.” Henry says, “For some people that’s just a sentence; for me that is the core value of this business. If we keep our integrity, everybody will do well. When we put that integrity into practice, everyone will have success and there will not be any breakdown in our team effort.”

Henry also has great respect for and trust in this from Jere: “We know that every time an Ambit Consultant approaches someone to become a new Consultant or customer, they are putting their reputation on the line and trusting that Ambit will deliver and perform as expected. Ambit’s goal is to be worthy of that trust.”

Knowing our top leadership has this kind of commitment gives Henry great confidence in building his Ambit organization. “The leadership of Ambit has given me the courage and the wisdom to follow them,” Henry says. “I want to thank God, Ambit and the entire team for changing my life and the lives of others; for giving me the opportunity to be part of this and to help more people - ordinary people like me.”