Sharing the Light with Others 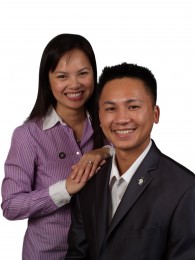 As an educator, Thien Bui made a career of enlightening others. But it wasn’t until he tapped into the limitless potential of Ambit Energy that he discovered how much he could shine.

For almost a decade, Thien Bui has used his skills as a teacher to enrich the lives of his students. It was during his career in education that he adopted the motto, “Let your light shine!”

“Words of encouragement can make such a difference, especially when you’re facing tough challenges growing up,” Thien says. “In the ‘80s, my parents made the decision to emigrateimmigrate to the States from Vietnam with me and my five siblings. They knew the ‘land of the free’ would offer real opportunity for us all. And it has!”

Hard Lessons and Mounting Concerns
Following his heart, Thien chose to help others reach their potential by pursuing a career in education. But after accepting a job in Texas to support his family, he began feeling overwhelmed by increasing financial stress.

“I’ve been a teacher for nine years, spending six seven of those teaching Spanish at Plano East Senior High School. I loved it, but I was struggling to make ends meet on a teacher’s salary, living in a small apartment in Lewisville. Life was tough, with mounting car payments, rent, student loans and other bills.”

Getting Turned on to a Bright Opportunity
“A friend from church invited me to an Ambit Business Presentation,” Thien recalls. “It instantly made sense. I was sold, simply because it was electricity - something everyone uses every day.”

Thien was ready to get started. But he soon realized that his expectations for growth weren’t big enough. “The extra income Ambit provided was the answer to my financial problems. Initially, I hoped to make an extra $100 a month, and that would have made me very happy. But Ambit always wanted to give me more,” says Thien. “Now, the residual income alone covers all my bills. And achieving real financial freedom is more than motivating. It’s irresistible.”

The Unlimited Potential of Dreaming Bigger
Once Thien discovered the earning potential and success he was capable of, he decided to step up his efforts.

But his friends and family remained skeptical. “My parents warned me that success in this business would take a long time to reach. But their minds quickly changed,” says Thien. “Now they’re supportive, encouraging and very proud of what I’ve accomplished. With Ambit income, I’ve been able to buy them a new car, a 3-D TV, and even paid for vacations.”

Sharing a Brighter Future with Those He Loves Most
At 32, Thien has achieved a new level of personal growth, security and achievement. “Ambit has given me the tools to ‘dream big’ and never limit my expectations,” he says. “In less than four years, I was able to buy my first home and pay off my car. And thanks to my residual income, I’ll never again have to worry about struggling to pay my bills.”

And one of Thien’s most important successes through Ambit was meeting his wife. “We’ve traveled to the Virgin Islands to scuba dive, New York to ski and California to swim. And we’re only getting started.”

The Team Behind the Dream
No matter how far he has come, Thien knows that none of his success would be possible without the efforts of his incredible team.

“From the bottom of my heart, I can never thank my team enough. It’s because of their passion and dedication that I am where I am today.” Thien adds, “I want to personally thank Terry LaCore, Danny and Jeannette Kirby, Cindy Le, Soli McCarry, Angie Bantog, Truc Le, Nghi Ly, Vincent Nguyen and all of my downline Consultants and customers. Thank you all for saying yes to Ambit.”

His Lesson for New Consultants?
For new Consultants eager to make the most of the Ambit Opportunity, Thien advises:

“Stay plugged in constantly. Go to the weekly meetings, trainings, and never, ever miss AMBITION.” He adds, “Attending three AMBITION conferences, I’ve seen it grow in number and strength. It’s the best way to meet other Consultants from all across the country and experience the full magnitude of this amazing opportunity.”

As a teacher and mentor, Thien has proven that even the brightest lights start from a simple spark.

“In the future, I see a life full of blessings. I want to help fund our parents’ retirement, create a college fund for our son and start traveling the world.”

Thanks to Ambit, Thien has not only secured a brighter future for himself and his family, but he’s also “letting his light shine” to others - sharing the Opportunity, teaching from experience and helping new Consultants achieve their own brighter futures.