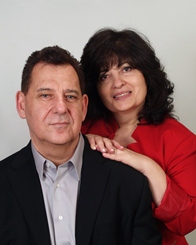 Arie and Mali Lengel both work for New York City in the engineering and information systems field. Although they were successful and led a comfortable life, after 20 years, they felt like their respective careers had both stalled. They wanted something more, and to have an opportunity to make the most of the talents they weren’t able to utilize at their current jobs.

Then, one night, Mali, while helping their daughter Sharon look for employment, attended a job fair. She saw 2 flyers: Energize your income and Free energy and was intrigued to see a service and not product in MLM. Arie was more hesitant. He remembered some bad experiences from another company, but Mali convinced him to attend an Ambit meeting in Queens to learn more. And that sealed the deal.

“I was immediately intrigued by the magnitude and uniqueness of the opportunity,” Mali says. “I immediately recognized the incredible support and integrity of this company.”

“We had a strong desire to free ourselves from a rut. We needed to build a new life,” Arie adds.

From Low Expectations To High Rewards

Like many Ambit Consultants, Arie and Mali initially underestimated themselves. “I thought we might be able to make a few thousand dollars a month,” Mali says. Arie was convinced that reaching Executive Consultant would be hard. However, as the couple worked and built a team of like-minded, dynamic Consultants, they began to achieve success. The couple achieved Regional Consultant status in just 30 days, and were named Senior Consultants after only eight months. Their three children followed them into the business and also became Senior Consultants.
“Our financial freedom was like escaping from a cage,” Arie says.

As Consultants, the couple feels that Arie has developed stronger leadership skills that have paid off with both his Ambit business and his work for the City. This business gave me options to retire early and travel the world Mali adds.

They Made There, New York, New York!
Arie and Mali have made it big in the Big Apple, but they’re a long way from done. “Our next goal is the Five-Star Trip, and to become National Consultants by AMBITION 2016,” Arie says. “We will achieve that by opening meetings in new markets in addition to existing ones.”“We see ourselves traveling across the country helping other realize the opportunity and change their lives through our example,” Arie explains.

Their advice for new consultants is simple. “Don’t prejudge people and let the system help you develop the right mindset for success.”It’s an attitude that has taken Arie and Mali Lengel straight to the top.

Our “Why?”
Financial freedom so we can free ourselves from the RUT (or as Arie says, from the cage) and start living a life.

Time spent working our Ambit business:
Exciting ride from success to success through hardships and failures.

Name your favorite thing about AMBITION.
Personal success stories and the like minded crowd’s excitement.

Thanks to the five SCs who helped me/ us reach EC.
Sharon Lengel, Dana Lengel, Yaron Lengel, Yoav Siani, and Lior Harpaz